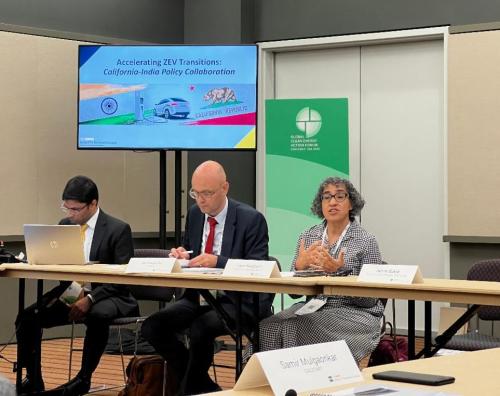 Pittsburgh, Pennsylvania – At the 13th Clean Energy Ministerial and Global Clean Energy Action Forum held in Pittsburgh, Pennsylvania from 21-23 September 2022, ITS-Davis announced the establishment of a new California-India partnership which aims to advance the research and policy implementation focus of transportation decarbonization efforts in India and California, providing an opportunity to engage policymakers globally in well-orchestrated efforts.

“The role of California as a state government and collaboration with potential other Indian states in addition to the Government of India, can provide a unique opportunity to leverage sub-national policy design as a key lever for vehicle electrification targets, and more importantly, harness the role of states as key laboratories of innovation,” said Dr Lewis Fulton, who will help lead the center. The new India ZEV Research Centre, will be supported by the Climateworks Foundation and the Hewlett Foundation. ITS-Davis also announced a strategic partnership with WRI India on promoting ZEV transitions in India and strengthening state-level action.

Aditya Ramji, who has helped orchestrate the creation of the new center, presented a briefing paper which finds that state level policies can play a very important role in guiding India to high ZEV adoption, and target setting can provide a clear market signal. The analysis provides a bottom-up estimate of cumulative EV ambitions of states, and its role in defining potential electrification scenarios for India and other supporting regulations. If the targets of only those states that have a notified EV policy are accounted for, by 2030 India can potentially achieve 18% electrification of new two-wheeler sales, 58% of new three-wheeler sales, 66% of new PV sales and 20% of new LCV sales.

The launch of the new center was followed by a roundtable discussion hosted by ITS-Davis in partnership with the Embassy of India, Washington D.C. and Convergence Energy Services Limited (CESL), on “Accelerating ZEV Transitions: California India Policy Collaboration.” Liane Randolph, Chair, California Air Resources Board, led the discussion by noting that California has recently mandated 100% ZEVs in light-duty vehicles by 2035, through the Advanced Clean Cars II rule. It also has an ambition to promote Zero Emission Trucking, as trucks while forming about 5% of the fleet in the state, contribute to over half of the particulate emissions in California, a challenge faced by India too. The two regions can collaborate not only on ZEV policy challenges but also of rehabilitating workforce through these transitions.

Mr Abhay Bakre, Director General, Bureau of Energy Efficiency, Government of India commented, “India has recently announced two PLI Schemes to advance EV and cell manufacturing with incentives worth $4 billion, and the BEE is working on supporting fuel economy norms for hard-to-abate sectors like medium and heavy-duty trucking. Learnings from the California experience can be very useful for India.”

Ambassador Ranganathan, Deputy Chief of Mission, Embassy of India, Washington DC, added, “As India positions itself as a leader in the global ZEV transition, there is an opportunity to facilitate cross-regional learnings. The State of California is probably the only regional government to have the most comprehensive and oldest ZEV policy ecosystem. The learnings from the California experience would offer India an opportunity to consider a mix of policies that would support ZEV adoption while simultaneously spurring the development of a nascent industry that can bring with it important industrial growth.”

Further remarks by Donald Hillebrand, representing the US Department of Energy, highlighted strategic areas of cooperation between the US and India on clean transportation including biofuels, hydrogen, and EV technology including battery localization and recycling. He and Dr Ravi Kota (Minister, Economic), Embassy of India jointly highlighted sharing of best practices between the two countries such as city and state level cooperation and building common analytical tools including Life Cycle Analysis (LCA) and technical cost models. Dr Kota also highlighted the opportunity for California to learn from practical action in India at scale and size.